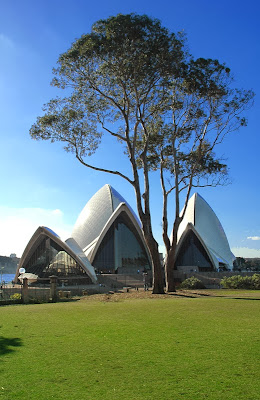 Trying to avoid controversy I am back to posting trees, but even trees can be political!

Behind this tree is Bennelong Point and the iconic Sydney Opera House which grounds Australia’s identity in European entertainment traditions and ultra-modern European architecture. The ancient tree and modern opera house stand in juxtaposition within a historical and political context. This place used to be known as Tubowghule, a name given to it by aboriginal peoples in a time when its shoreline was scattered with millions of oyster shells left from tens of thousands of years of gathering. When the British occupied the area they collected the shells, made lime from them and used this in mortar to build a structure that they told the aboriginal people was ‘Government House.’ From this building they successfully planned ways to remove the territories and children from the surrounding aboriginal nations. The British also changed the name of the land the Opera House now stands on from ‘Tubowghle’ to ‘Bennelong Point,’ a name derived from an aboriginal person they kidnapped and used as a cultural interlocutor in the colonization process.

So against this backdrop how is the photograph to be understood? The answer is that it is to be understood whichever way you understand it. But when you first saw the photograph, if you did not know this place as ‘Tubowghle,’ if like me you visited Australia without finding out its non-European name, perhaps you will see that almost everything we understand is culturally and politically mediated.

So what do I see in this photograph? I see a magnificent building that I truly admire in a city I love! But I also see irony in its white curved structures that most people think represent sails, like those of the ships that brought the British, but which I think are more reminiscent of sea shells and a deeper history buried beneath the building, a history that perhaps the tree remembers and understands.
posted: Monday, October 09, 2006