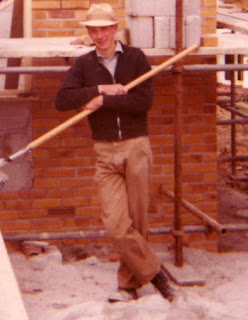 This is a photo of me as a construction worker--I had a physique like Samson from the bible--I was skinny.

I never realized that Samson was skinny until two events occurred, the first happened one dark night in Epping, the next when I listened to a sermon by my friend Colin Gibson. Let me explain...

In the 1970s I helped Counties Evangelists Geoff and Isobel Carr as they traveled around Essex running programs from huge Marquee tent. We took turns staying overnight on site for tent security. One dark rainy night in a lonely field on the outskirts of Epping it was my turn.

Just after midnight I was dozing off all alone in Geoff & Isobel's caravan, when I heard a noise from outside. I looked out of the window and about a dozen members of a biker gang were trying to let the tent down! I burst out of the caravan door and charged across the field shouting, "Hey you lot that's enough of that!”

The bikers ran in fear, but weighed down by heavy damp leathers and chains, they clanked awkwardly through the muddy field, they looked like Orcs scrambling back to Mordor in a Tolkien novel. I on the other hand, in pajamas and bare feet, flew rapidly across the ground. I quickly closed the gap and I was about to move in on them, when I began to wonder what was going to happen when I actually caught them. I held back, they clambered on their bikes, and roared off in a plume of oily exhaust.

I could never figure out why an entire biker gang ran from a skinny builder in pajamas. I found the answer years later in a sermon given by Colin Gibson at Tower Hamlets Mission during the 1980s; it was because I was like Samson!

Colin said that we always imagine Samson being huge, looking like the Incredible Hulk, with bulging biceps and forearms as thick as trees. This is the way the story of Samson's incredible strength makes sense right? Well no, not according to Colin.

Citing David Pawson, Colin explained that the Bible tells us that back in Samson's day, people wanted to find out the “secret” of his incredible strength. So if Samson had looked like the Hulk, there would have been no secret, because his strength would have obviously been in his size and muscles! People could not figure out Samson's strength because he was skinny! The secret was that Samson's strength was not from muscle, it was from God.

Stories of the Epping encounter story still circulates in churches. I visited a church years later and overheard someone retelling the story. “What the biker gang did not know,” the person telling the take said, “is that hidden in the caravan guarding the tent was a huge construction worker with bulging biceps and forearms as thick as trees, so when the construction worker burst from the caravan door growling, the bikers ran in fear of their lives!”

Amused, I walked over to those enjoying the story and said, “That was me! I am that construction worker!” The group looked at my geeky appearance and skinny frame in disbelief. “No really it was me!” I added. They glanced at each other bewildered!

_________________________
Postscript: Now I am much older and a little wiser, I think I would have handled the entire biker situation differently. Rather than charge out on impulse, I would instead walk casually over and invite a conversation. After all that was the point of the tent; to engage conversation. Maybe back in my impulsive youth I was like Samson in more ways than one!
posted: Wednesday, December 15, 2004 No comments: