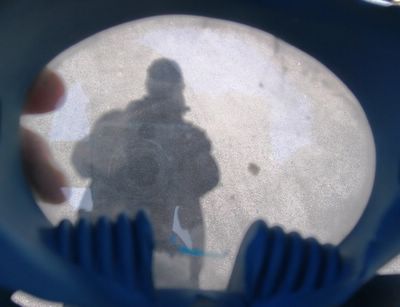 I was cleaning out the garage last week and I found an old divers mask that I brought as a teenager. I remember the undersea places I have seen through it over the years: Submerged caves off the Atlantic coast of Britain; lockes in Scotland where I wondered if there were monsters; docks in London where I looked for contraband thrown from freighters; flooded underground tunnels in Cornwall where there once had been miners; rivers in South America where I hoped there were no piranha; blue waters in the Caribbean where there once had been pirates; stormy waves in the Mediterranean that had sunk Roman galleys.

I noticed that the mask is now so old that the rubber is crumbling and disintegrating so I have to throw it away - so I will not have those adventures or see those places again. Not with this mask anyway.
posted: Saturday, April 30, 2005 No comments: 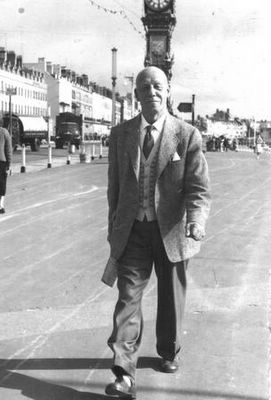 Sunrise services were held today in Turkey to remember the WWI Dardanelles Campaign and this made me remember my granddad. On this day ninety years ago granddad (my mother’s father), a soldier in the British army, was pinned down by artillery, sniper and machine gun fire on a thin beach at Gallipoli. So hard was the battle that the ocean turned red with blood up to 50 meters from the shore and 1 in every 2 allied troops landed became a casualty, with 44,072 allied troops killed and 97,037 wounded. Despite a higher enemy (Ottoman Empire) casualty rate the campaign ended in a stalemate. Somehow granddad got out of all that mess and lived to a good old age — but you can see in the photo - even as an old man he marched like a soldier.

What I found really sad is that at today's service there was not a single veteran from the campaign - they have all left us now - just like my granddad!
posted: Monday, April 25, 2005 No comments: 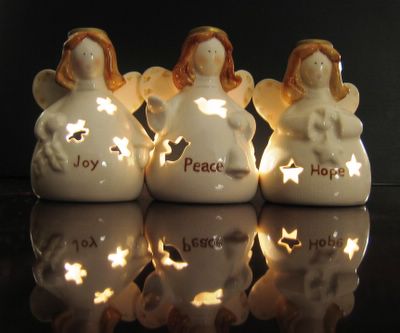 I love these – three little china angels – joy, peace and hope. On special occasions I light and place a candle inside each and they glow much like we do when we have joy, peace, and hope inside us. Today’s special occasion is my mom’s birthday. Mom I wish you joy, peace and hope and I thank you for the joy, hope and peace you gave to me as a result of being the best mom in the world! Happy birthday mom!
posted: Saturday, April 23, 2005 No comments: 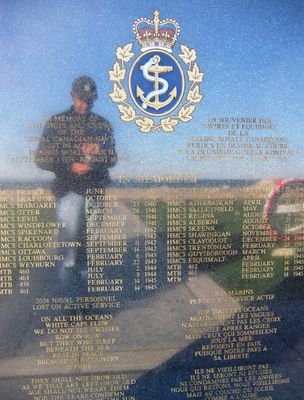 Riding my bike in Burlington last night I came across a monument in memory of Canadian ships and crews lost in WWII. There is absolutely no doubt that I stand here free because of them — so I took a few moments in silence to remember.
posted: Friday, April 22, 2005 No comments: 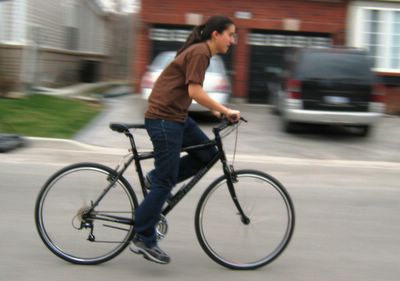 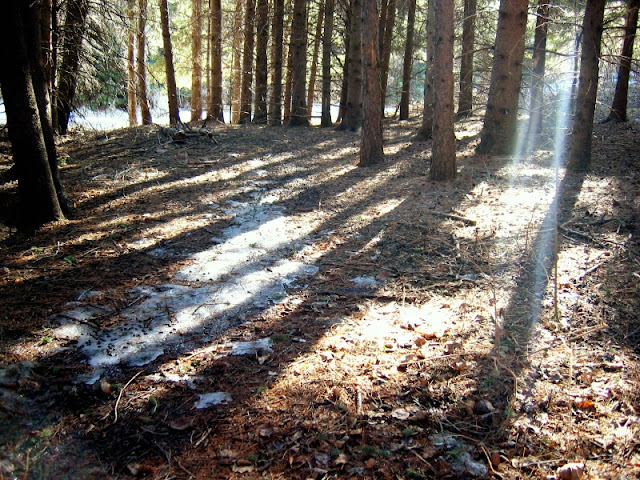 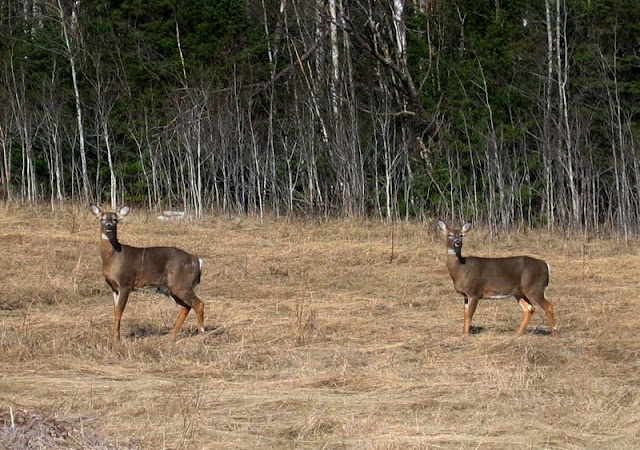 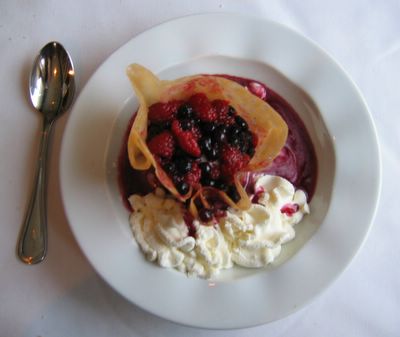 What better way to end the day? This dish is called "Warm Drambuie Berries" and it is a warm mix of berries in a hot buttered drambuie sauce served over vanilla ice cream in a brandy snap. Yumeeee!
posted: Tuesday, April 12, 2005 No comments: 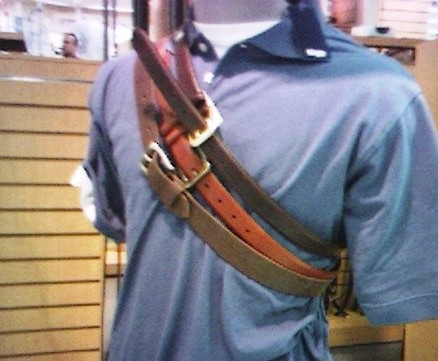 I took this picture today (taken with my phone) because it reminds me of a great story, which I will share with you.

When I saw a manikin with belts placed around it like bandoleers and I was reminded of a story I was told by a World War I veteran about a daring young soldier who seemed to be bullet proof. The veteran has long since passed away and it is possible that I am the only person living who knows this story. So I took a picture with my phone camera and I now tell you the story so that it is not lost.

The veteran served in Iraq during WWI and spoke of the landings at Al Faw, a rapid advance toward Basra and a daring attempt to take Baghdad in 1915. He told of the enemy pushing back and a siege at Kut. He detailed the British counter attack that sacked Baghdad in March 1917 and spoke of the tough march to Mosul. Among these and other desert battles the "bullet proof boy" wrapped in bandoleers and dressed in desert garb, earned a reputation of being impervious to enemy fire. With an ability to run like no other he would charge the enemy lines leaping over barbed wire, dodging machine gun fire, and jumping into enemy trenches where even at close quarters bullets fired at him would always miss while every round he fired always found its mark.

One day, under a particularly hot desert sun, the British advance was pinned down by heavy enemy fire but the bullet proof boy was not afraid. Spurring on the troops he ran from a trench to trench dodging bullets and laughing at the inability of the enemy to shoot him. Suddenly, however, the bullet proof boy winced and he fell dead into a trench at his comrades’ feet.

The veteran sobbed as he recalled examining the body to discover that an enemy bullet had glanced and set of a round in one of the bullet proof boy's bandoleers - he had been killed by one of his own rounds. The bullet proof boy, therefore, died as he lived; enemy bullets could not touch him, but his own bullets always found a mark.

The next time you see a manakin in a department store dressed in belts remember this story and pass it on to a friend, this way the bullet proof boy who died before he had a chance to grow up and enjoy life, will at least get a change to live little longer in our memories.
posted: Saturday, April 09, 2005 No comments: 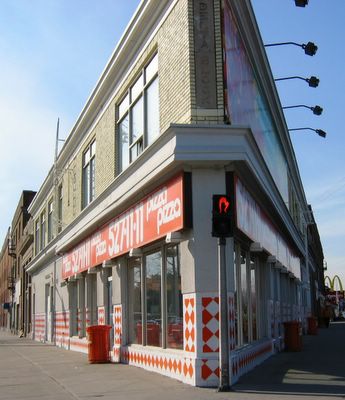 I could not help noticing that this building is shaped like a slice of pizza!
posted: Thursday, April 07, 2005 No comments: 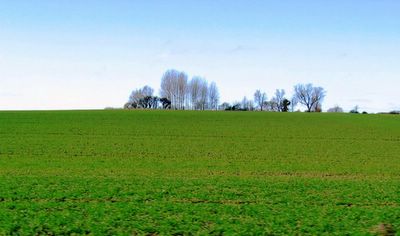 When I took this photo of this English scene I was singing William Blake’s poem from the preface to his work Milton, which most of us know as the hymn Jerusalem. Maybe you remember it being sung in the movie “Chariots of Fire.”


And did those feet in ancient time
Walk upon England's mountains green?
And was the holy Lamb of God
On England's pleasant pastures seen?

This hymn touches my English heart! But at the same time I find the words problematic. I don’t think Jesus ever did come to England and the speculation that He might is an attempt by my fellow countrymen and women to write England into Biblical history. I would excuse this self-indulgence if it were not for the way Britain, and other European nations, have imposed their own cultural traditions on the way Biblical times are nowadays interpreted. The last verse worries me too:

I will not cease from mental fight,
Nor shall my sword sleep in my hand
Till we have built Jerusalem
In England's green and pleasant land.


If the “sword” is metaphorical then all well and good, but we know that it is not, real swords were taken up by England to slaughter innocents in Crusades and religious wars that should never have taken place.

So what is my point of my rant? Well my point is that loving ones nation and being patriotic must go hand-in-hand with a realistic critique of the past and present errors and injustices one’s nation has perpetrated and supported. I love England (I also love Canada too), but such love does not stop me speaking out on issues that need to be addressed. Perhaps when we can do that I will go back to singing Jerusalem - in the mean time I have stopped - and events like the one below make me somewhat uneasy! 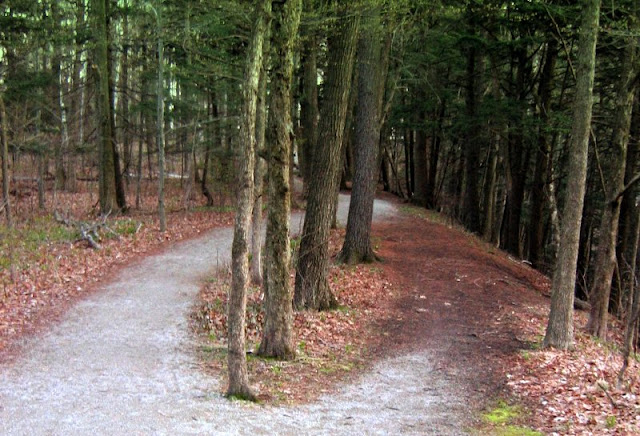