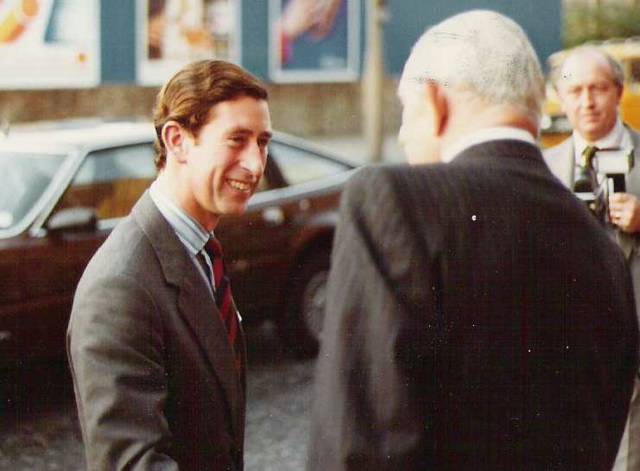 Even as an undergrad I always carried a camera. One day I showed up at University to find the entrance blocked by a crowd. Irritated, I pushed my way through and bumped into a guy getting out of a limousine and shaking hands with our university president. I grabbed my camera and took this picture.

As he walked toward the entrance burly men pushed back the crowd and I realized this was my opportunity to get in the building and to the library where I needed to revise for exams. As soon as we were in the entrance it dawned on me that perhaps this fellow was going somewhere more interesting than the library so I tagged along.

As I followed into a reception hall I was handed a glass of exceptionally good sherry by a man who said, 'jolly nice day isn't it.' I smiled and agreed. I was treated to really really nice salmon and cucumber sandwiches, all sorts of delightful cakes and of course several more glasses of sherry - this truly was 'jolly good day.' The only people who did not seem jolly were the burly men who I noticed were carrying guns under their jackets and were looking oddly at my faded blue jeans and running shoes, which I must admit were a little out of place. Sipping just one more sherry, and stuffing a few of the last sandwiches in my empty undergrad pockets, I decided it was time to leave.