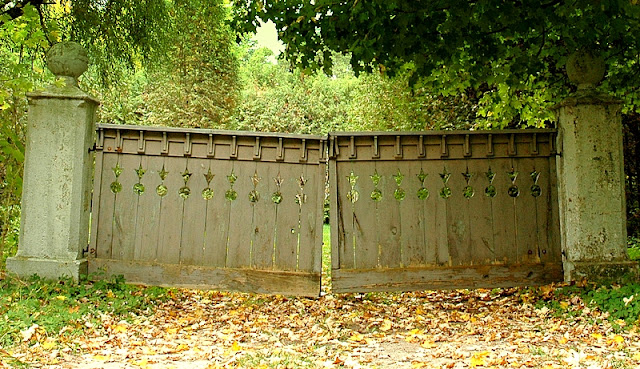 When I was taking this picture near Owen Sound some people in a truck stopped and told me that it led to a replica castle. The gates then reminded me of England and a place where Sir Gawain was said to have traveled long ago seeking the Green Knight. A fourteenth century contemporary of Chaucer told of the Green Knight who rode into Camelot on new-years day insulting the Court and challenging any to strike him a single blow on condition that a year hence he would be allowed to return that blow. Sir Gawain quickened by anger rose to the challenge and struck off the Green Knight's head with a single swipe. Everyone thought the matter settled but the Green Knight rose, picked up his head, and told Sir Gawain to seek him out at the Green Chapel in one year for the blow to be returned. Next Yuletide Sir Gawain sought the Green Knight and perhaps it was gates like these he opened and wondered:


Can this be the Green Chapel? Here might the devil say his mattins at midnight! Now I wis there is wizardry here. 'Tis an ugly oratory, all overgrown with grass, and 'twould well beseem that fellow in green to say his devotions on devil's wise. Now feel I in five wits, 'tis the foul fiend himself who hath set me this tryst, to destroy me here! This is a chapel of mischance: ill-luck betide it, 'tis the cursedest kirk that ever I came in!

Needless to say after taking the picture I did not venture through the gates - but when I got home I did re-read my copy of the tale. For those who have not read the story I recommend it, especially the translation by J. R. R. Tolkien and E. V. Gordon. The story is not entirely as it sounds, of two men full of bravado, but rather it is a story of deeper meanings and warnings for those driven by pride and thoughts of being better or more noble than their peers.
posted: Saturday, October 15, 2005