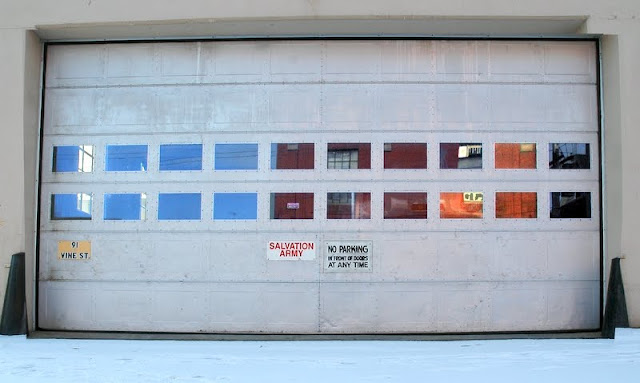 I took this picture of one of the garage doors at the back of the Salvation Army building on Vine Street, Hamilton. There is an array of these doors along making the place look like a fire station, but instead of fire trucks there are vans ready to take out clothing and other supplies to the needy.

It is fitting that a place dealing with poverty looks like a fire station because poverty really is an emergency. Around the world 30,000 children die each day as a result of poverty. And poverty is not just an issue of far away places, in the Hamilton streets around this building almost 20,000 people live in poverty and this includes one quarter of the children in Hamilton! According to the Hamilton Social Planning and Research Council, from 1990 to 2000 the wealthiest 40% of the population experienced an increase in their average incomes, while the poorest 60% of Hamiltonians experienced an overall decrease in theirs. Well at least the doors at the Sally Ann tell the story - there is an emergency going on here.
posted: Tuesday, December 06, 2005