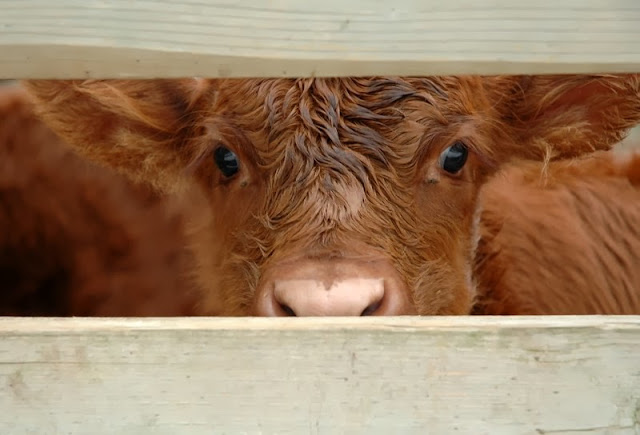 Original Post January 8, 2006: A baby calf peeks out at the world from a paddock at Bronte Creek Farm - taken on todays trail ride. As it was rather cold out with snow and ice in the paddock, I asked him if he minded being outside in the winter. He just stared at me and did not reply. Then I thought of how silly I was because of course he can't speak yet, he is only a few weeks old!

Updated Post January 31, 2006: A few nights ago I rode the trails again but I did not take my camera because it was dark and damp. When I got to the farm a cow had just given birth and I watched as the newborn calf struggled to stand for the first time. Nobody else was around except a few cows and calves (including the older calf pictured above) who in the winter damp casually strolled over to greet the newcomer. As I had no camera I could not take a picture to share, but I decided to add this update and share the picture in words.
posted: Tuesday, January 31, 2006