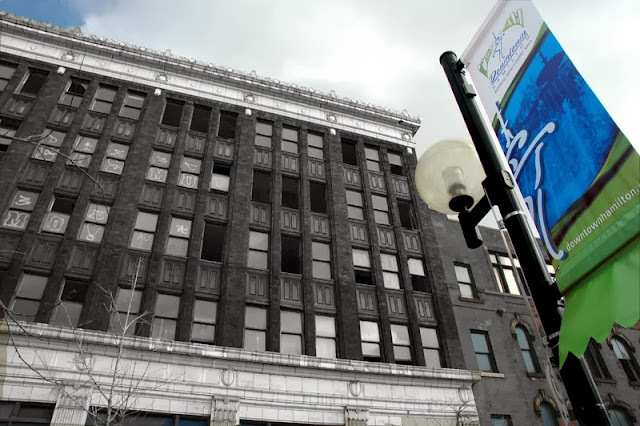 I am not sure why this Downtown Hamilton building is empty when the streets around it are full of homeless people. In some countries 'squatters rights' give people the right to move into empty buildings and live there. Once in the building, the 'squatters' have similar rights to tenants and they cannot be evicted without a court order. If Hamilton had a law like that people might have moved into this building and fixed it up long before it started to rot. But it seems that in Canada the right of landlords to let empty buildings rot take precedence over peoples right to find a home. Here there are few laws or viable government programs to help the poor or homeless. The government, however, does have a program that gives thousands of dollars in free money to the wealthy landlords of empty buildings to fix up their properties for commercial use. Another government project gives property tycoons millions in interest free loans to turn downtown buildings like this into luxury apartments to sell at a tidy profit - in Hamilton ten million dollars has already been allocated in this program - to me this sounds like socialism for the rich and capitalism for the poor! Why not establish squatters rights and give the ten million dollars to homeless people and then support them in turning empty buildings into affordable housing?
posted: Tuesday, February 28, 2006 No comments: 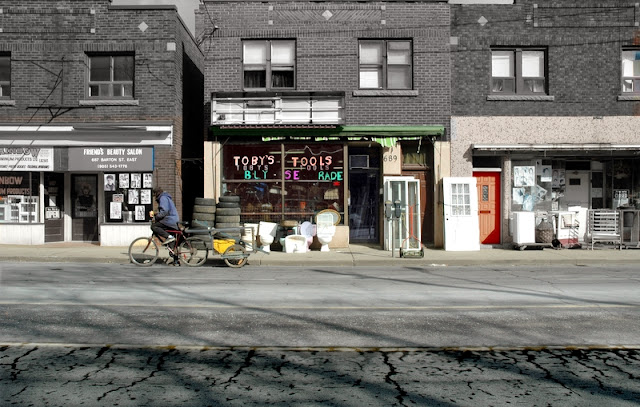 The big hope for the North End is 'gentrification,' the hope that the leisure and tourist development of the docks will attract business and send property prices up so that the neighborhood will flourish. This may be the hope for the neighborhood but not for these neighbors - how will the people here will fair when the rents go up? Gentrification by definition benefits the gentry and not these folks.
posted: Monday, February 27, 2006 No comments: 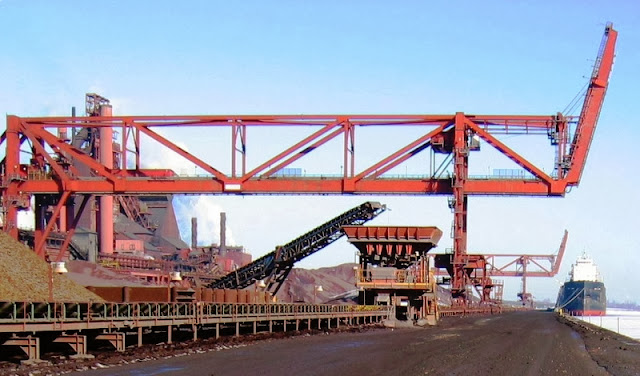 I took this last winter in Hamilton Docks - the size of the machinery dwarfs even the ships!
posted: Sunday, February 26, 2006 No comments: 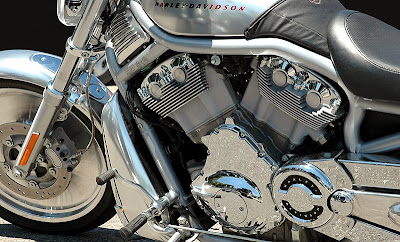 When I get a motorbike it is going to be just like this one! I saw this bike last summer and took a photo so that when I go to the Harley store, I can say I want one just like that! Not sure when that will be, but in the mean time I will dream.
posted: Saturday, February 25, 2006 No comments: 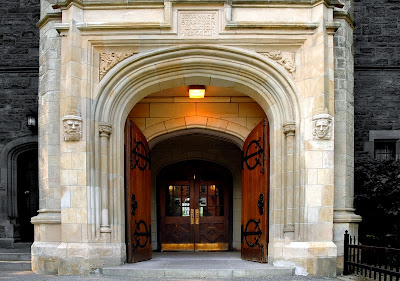 I can't remember where I took this - somewhere at the University of Toronto - after a while one fancy door begins to look much like another.
posted: Thursday, February 23, 2006 No comments: 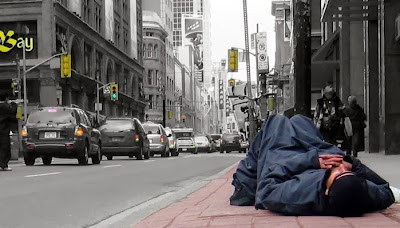 We all need to feel safe when we sleep; this is why some people who are homeless choose sleep in the middle of the sidewalk. The stories I am told about some of the hostels are quite scary, and sleeping in a quiet ally leaves people very vulnerable and open to attack. In the absence of a safe hostel the remedy is to sleep in the open and hope that the passers bye keep an eye on you. So next time you see someone sleeping on the sidewalk like this person on Yonge Street in Toronto, don't get annoyed with them - intead take a look and make sure they are okay - they may be relying on you to do that.
posted: Tuesday, February 21, 2006 No comments:

I took this photo some time ago - it is another one of those shots that just had to be taken. Wrapped in a blanket a person who is homeless sleeps on a cold Toronto street corner. The sign says that 'it all starts with caring,' but I suspect that it all starts with us not caring.
posted: Tuesday, February 21, 2006 No comments:

the way we were 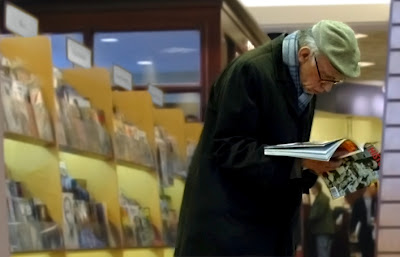 I just had to take this picture of this elderly man in Chapters reading a World War II History magazine - a history he undoubtedly helped to make.
posted: Saturday, February 18, 2006 No comments: 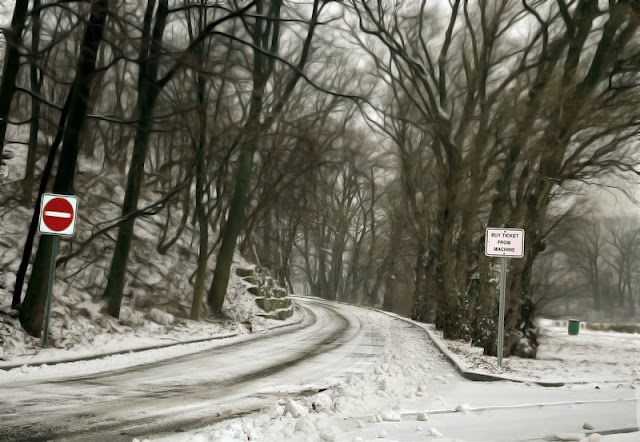 This morning there was light snow and I thought it may be a good time to take a picture at Princess Point on my way to work: I was right
posted: Thursday, February 16, 2006 No comments:

Tonight driving home I noticed a small wooden post crowned with orange tape in field I have come to love for it's summer corn. I know what it is - a stake in the heart, a mark of death - a builder's datum. This field that has fed so many for decades is about to be eaten by urban sprawl.
posted: Wednesday, February 15, 2006 No comments: 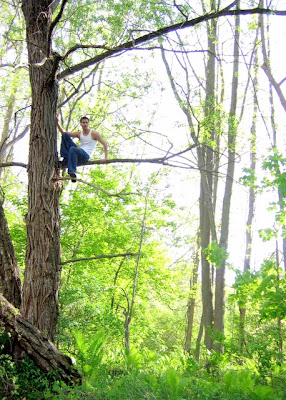 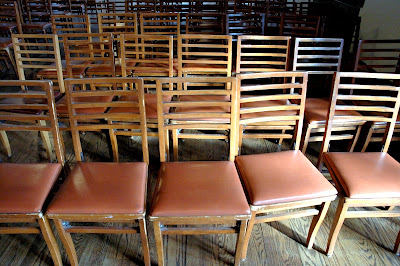 I took this picture in Hart House, University of Toronto. Although I am an academic, I don't think I would want to become a char at UofT
posted: Sunday, February 12, 2006 No comments: 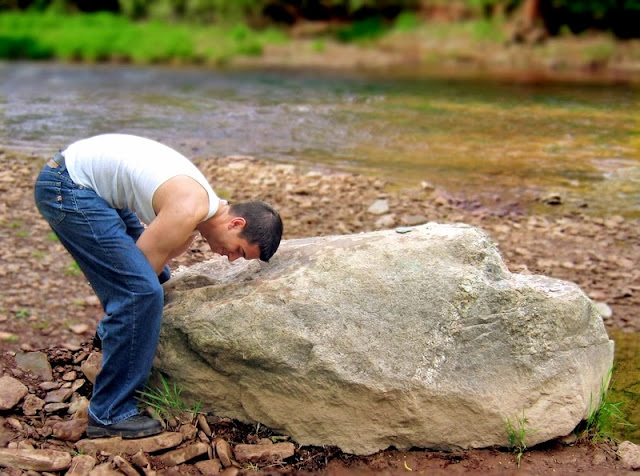 When Jamesix was a little baby someone put too much magic potion brewed by the Druid Getafix in his bottle. Ever since then Jamesix has been trying to get a job with Obelix as a delivery person.
posted: Saturday, February 11, 2006 No comments: 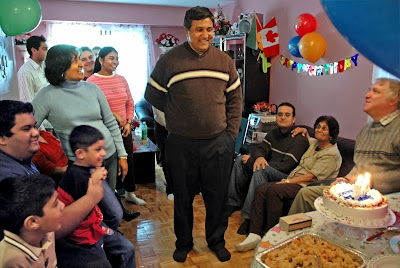 Last weekend Samuel, visiting from Guyana, was given a surprise birthday party! The quality of the photo is not so great, but I love the expressions on people's faces, it really captures that moment. Happy birthday Samuel!
posted: Friday, February 10, 2006 No comments: 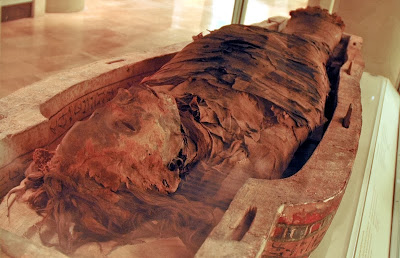 Time for another picture from my recent trip to the ROM. I have always had mixed feelings about museums exhibiting what are essentially dead bodies because it does not seem that respectful to whever these people once were. Yet the ancient Egyptians believed that if they and their name were remembered they would live on in the afterworld. So in these circumstances I suspect memorializing an ancient Egyptian in this way is in fact quite respectful.
posted: Thursday, February 09, 2006 No comments: 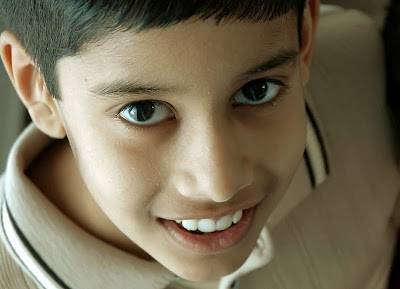 This is Joshua, he is the older bother of Andrew who I photographed some time ago.
posted: Tuesday, February 07, 2006 No comments: 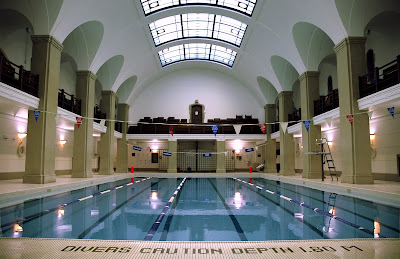 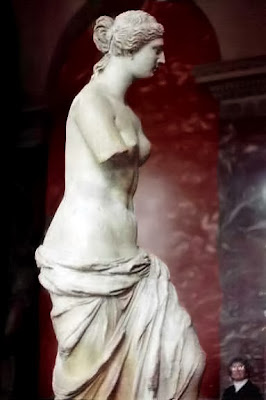 As promised, let me introduce you to Venus de Milo, or Aphrodite as she is known by the ancient Greeks. I had anticipated meeting her for years but I did it was a bit of an anti-climax. Of course I was impressed, especially by the fact this sculpture is over 2,100 years old, but I was not sure why this work gained the reputation as the most beautiful and significant ancient Greek sculpture in the world. I later discovered that much of this reputation came from hype generated by the French authorities after they reluctantly returned to the Italians the much more beautiful and significant Medici Venus that had been stolen by Napoleon Bonaparte. Just goes to show that even beauty is a matter of politics.

As for the picture, I snapped it as I came of the escalator that leads to the exhibit. Note the perfect framing of the arch over Venus' head and the nice perspective given by the lady off to the right looking up. I wish I could say I planned these features, but they were just luck
posted: Friday, February 03, 2006 No comments:

more from the rom 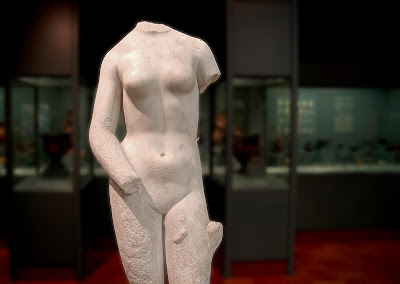 The best sculptures I have ever seen were relatively modern, Rodin's work in Musee d'Orsay. Nothing I have seen since comes close. In terms of older sculpture, however, this particular ROM gallery is a real treasure house! This work for instance, in my opinion, is even more amazing than Venus de Milo in the Louvre. The truth is I was not impressed when I saw Venus. Maybe tomorrow I will dig back in the archives and post the picture I took of Venus de Milo some time ago and then you can decide for yourself which work you prefer.
posted: Thursday, February 02, 2006 No comments: 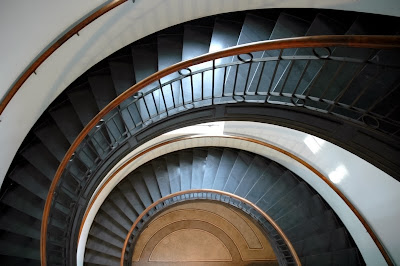 This is a stairway in the University of Toronto Convocation Hall. The hall was built in 1906 and by Canadian standards that makes it a historic building. UofT itself dates back to 1827 when it was known as Kings College. I like spending time at UofT because there is a nice sense of history about this place. Maybe I like it because it reminds me of home - England. Yet compared to England it all seems quite new - for instance Oxford University dates back 1096 - a real sense of history there!
posted: Wednesday, February 01, 2006 No comments: