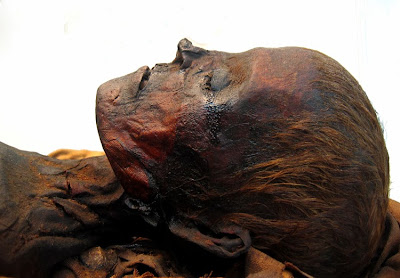 As promised in yesterdays post, an unwrapped mummy from the British Museum. This person lived in Thebes in about 2600 years ago. Unfortunately it is unclear who this is, the name Ankhpakhered, son of Ankhefenkhons was written on the sarcophagus, yet when the unwrapping occured in the mid-19 th century they found a female. So the exact identity of this person remains a mystery.

I hope the image does not gross you out too much - when deciding whether to post it I did reflect that there was a hold bunch of little school children in the museum looking at this and other mummies - and they were not grossed out at all. With than in mind, in the interests of science, I decided to post the picture.
posted: Wednesday, April 05, 2006