dull is the eye that will not weep 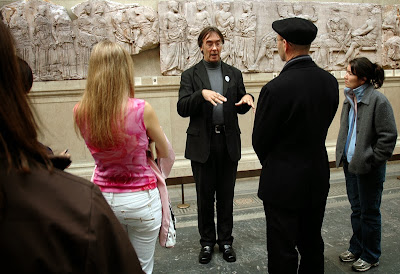 This British Museum tour guide is explaining why the 'Elgin Marbles' (some of which can be seen behind him) should not be returned to the Parthenon. First he explains that if we gave them back then pretty much everything in the museum would have to be returned because it was all just taken from people. Second he explains that Lord Elgin, who took the marbles, actually paid for them and he has a receipt to prove it! Somehow neither argument works for me - come on British Museum do the honorable thing and give them back - Byron summed up what abducting the marbles did to the Parthenon: