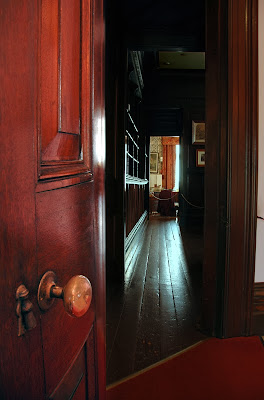 After dinner MacNab and his male business associates would leave the ladies in the drawing room and pass through this doorway to the smoking room where they would plot. Their plot was simple, to preserve at all cost the absolute control they wielded over the Canadian government. MacNab and his elite friends called themselves the ‘Family Compact’ and dedicated themselves to policies that Charles Dickens described during his visit to North America as 'rabid Toryism,' policies that kept everyone in their place and the Family Compact in control.

But the Family Compact had a problem, the control they wielded was under threat, not least because of rebellion and reforms led by William Lyon Mackenzie. Several times careful plans laid in this hallway against Makenzie suceeded in having him thrown from the Canadian Assembly, but each time he was elected back by the public. Eventually all of the strategies developed in these shadows failed and when MacNab himself was finally forced from government the days of the Family Compact were over. Yet even though this extreme form of conservatism was done, it would still be a long time before the ladies were allowed out of the drawing room!
posted: Saturday, May 27, 2006