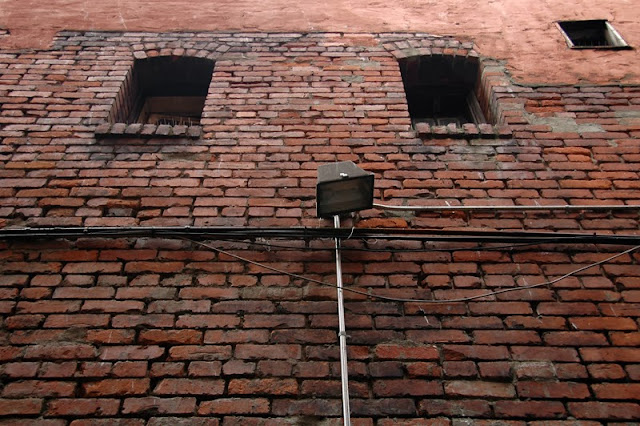 Another shot in Victoria. Look at this old wall, it is beautiful!

The pattern (bond) of the bricks in this picture is five rows of stretchers (bricks laid lengthwise) to every one row of headers (bricks laid widthwise). This is similar but not quite the same as an English Garden Wall Bond which is three rows of stretchers to one of headers. The pattern is also similar but not quite the same as American bond which is a six to one pattern. Maybe the bricklayers decided that as Canada was somewhere in between England and the United States they would pick an in-between figure. The pattern leans more toward the American though and note around the windows the method used to create the bond is to cut a three quarters length brick which for sure is American because most England bonds use a header followed by a ‘queen closure’ which is a brick split lengthways and laid sideways in the wall. The other clue that this is a more American scene than English is that these types of bond would only be used on garden walls in England — for buildings with nine-inch think walls (which is what this wall is) where higher degrees of structural integrity are required bonds with more frequent patters of headers are used because they reduce the numbers of internal straight joints and thereby strengthen the wall.
posted: Friday, October 27, 2006