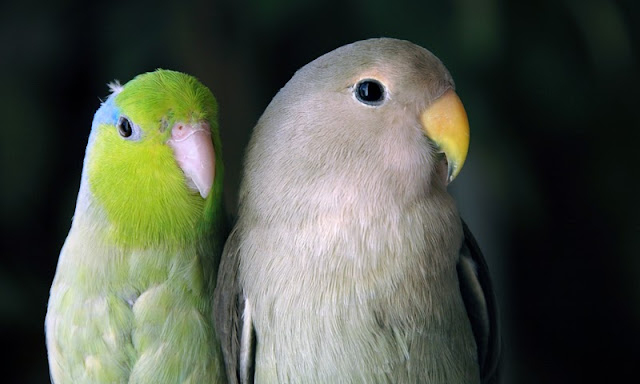 Irwin, the slate peach faced lovebird on the right, was very lonely and did not chirp or sing. Irwin wished that he had a close special friend but sadly all the other birds he lived with paid him no attention. The other birds would play together but when Irwin tried to join in they would fly away. Irwin spent most of this time sitting sad and alone.

In a city not far away lived Kiwi, a Pacific Parrotlet. Kiwi had a very good home with people who loved him, but he got lonely during the day when they were out at work and at school. Kiwi’s family could see that he longed for friends and it was a hard decision but they knew it would be best for Kiwi if he were to live with other birds. So his family brought him to the house where Irwin lived.

Kiwi was likely to get along with the other birds but unlikely to get along with Irwin because Love Birds and Pacific Parrotlets are both territorial. At best Kiwi would ignore Irwin and at worst they would clash, either way Kiwi arriving was likely to make Irwin even sadder and lonely because he would be one more friend he did not have. But when Kiwi arrived he flew direct to Irwin’s side and began to groom him. Irwin snuggled next to Kiwi and began to groom back. From that moment on Irwin and Kiwi have been inseparable and they spend each and evry day cuddling and singing to each other - and they lived happily ever after.