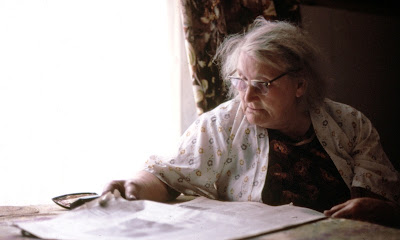 This is a picture of my grandmother in her old age. My grandmother, a social activist, always had great stories to tell of growing up and living in London’s East End. One of those stories was the day she fought the "Blackshirts" in the Battle of Cable Street. Speaking of the battle she told me, "boy," (she always called me boy), "that day I picked up a big stick and cracked some fascist heads."

In 1930s Britain, Sir Oswald Mosley’s British Union of Fascists (the Blackshirts), an organization aligned with Hitler’s Nazi party, were attacking Jews and Jewish businesses in London’s East End. At the height of this violence, Mosley organized an Anti-Semitic march through Cable Street - the heart of the East End's Jewish community. Early Sunday October 4, 1936 thousands of Blackshirts rallied outside the Tower of London and began to march toward Cable Street. The Blackshirts were supported by the police because the government had refused a request by Jewish community to ban the march and instead asked the police to support the Blackshirts and ensure that they were able to exercise their democratic right to march.

The East Enders had had enough: local residents, Jews and Trade Unionist and others joined forces, barricaded the entrance to Cable Street and stood firm. The police charged the barricade followed by the Blackshirts - but the East Enders did not budge and they prevailed – the march did not proceed.

I don’t support violence, but there are moments in history when people need to rise up, stand firm, and not back down, and this was one of those moments. May we all have the wisdom of my grandmother, for there is a time for everything: a time to tear down and a time to build up, a time to be silent and a time to speak, a time to walk away and a time to pick up a big stick just like so many East Enders did on that day!

Below is a news video of the clash but be warned it contains violence. Notice how the commentator praises the police for keeping the peace, but skims over the fact the police were using excessive force to attack the protestors in an effort to move them out of the way so the Blackshirts could march through the East End and intimidate Jews.
posted: Thursday, February 15, 2007