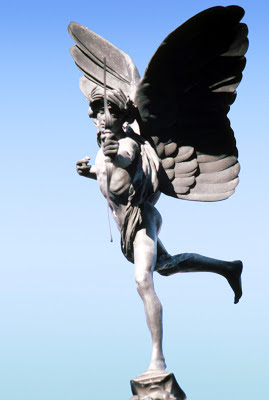 I took this is a picture some time ago—it is the statue of Eros, the Greek god of passionate and erotic love, at Piccadilly Circus in London. Well at least most people think that it is Eros, but truthfully it is Anteros, Eros’ twin brother who is the god of requited or returned love. The sculptor, Alfred Gilbert, had already started a statue of Anteros when commissioned, so he just carried on making Anteros and thought that people would be none the wiser. The other twist to this story is that Gilbert was not actually asked to make Eros, but the Angel of Christian Charity, and of course charity is another form of love. Victorian London, however, rather than being none the wiser, was not amused when an almost completely naked Anreros showed up in Piccadilly Circus posing as an Angel of Charity! Anyway, ever since then, people have been referring to this statue as Eros.

I thought this picture and story would be a good lead in to Valentines Day.
posted: Tuesday, February 13, 2007