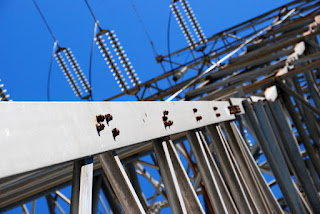 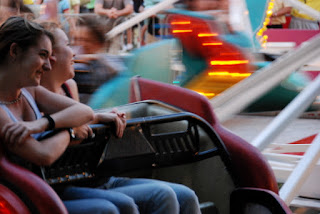 A shot I took at a fairground ride during a recent festival in Burlington.
posted: Thursday, June 28, 2007 No comments: 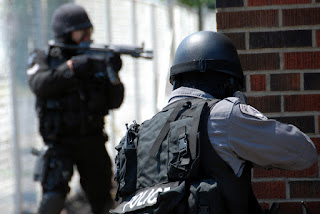 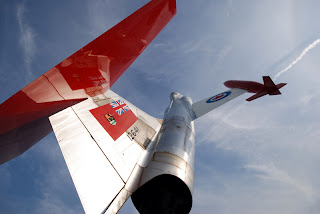 Everyone who goes to the Canadian Warplane Museum takes a picture of this CF-104 Starfighter that points to the sky outside, so of course I had to take a picture too! 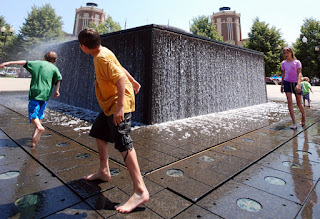 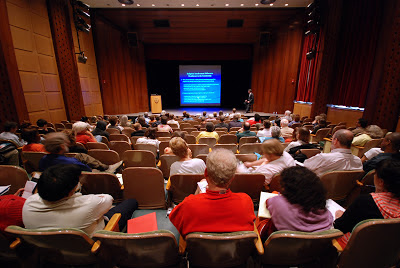 A photo from one of the last presentations at the Chicago conference. Although the conference is over, I will be posting photos from the event for some time.
posted: Saturday, June 23, 2007 No comments: 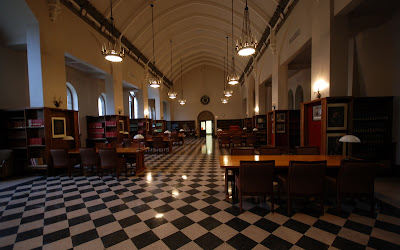 Today at the conference I found this nice spot to read during a break.
posted: Friday, June 22, 2007 No comments: 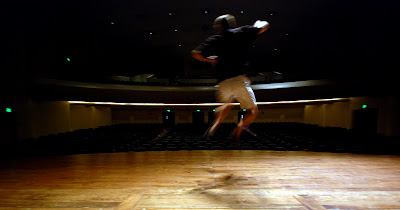 As you can see in this self protrait - I am still dancing! But Chicago is not all song and dance - today's conference schedule began at 7:30am and ended at 9:00pm.
posted: Thursday, June 21, 2007 No comments: 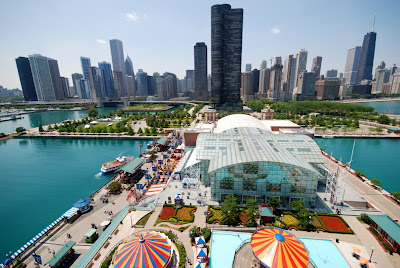 I am in Chicago for a conference - so there is not much time to check out the city - although I did get to check see the skyline from Navy Pier.
posted: Wednesday, June 20, 2007 No comments:

my kind of town 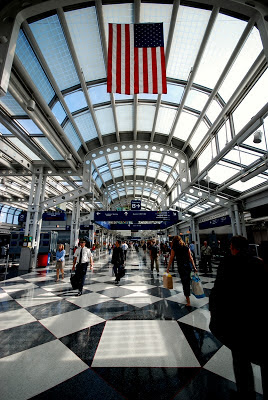 I arrived in Chicago today and found out that Frank was right - people here really do smile - but maybe because I keep singing:

And each time I roam, Chicago is
Calling me home, Chicago is
One town that won't let you down
It's my kind of town

Here is to you Old Blue Eyes, wish you were still around!
posted: Tuesday, June 19, 2007 No comments: 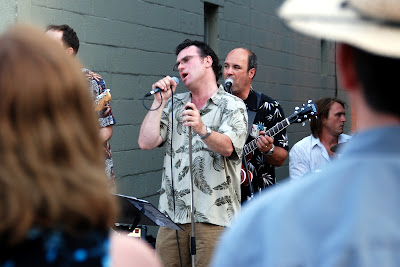 Burlington recently had a festival—it was really good—of course I went with my camera. Downtown in almost ever alleyway there was yet another performer of group.
posted: Monday, June 18, 2007 No comments:

per ardua ad astra (through adversity to the stars) 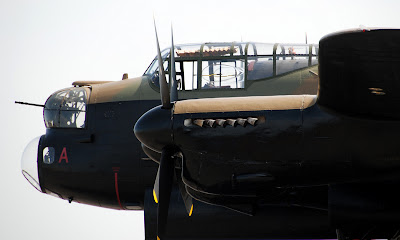 This is the Avro Lancaster the legendary British WWII bomber. Over 7000 of these aircraft had once taken to the skies and now only two are left flying—one of them (this one) at Hamilton’s Canadian Warplane Heritage Museum.

I was moved when I saw this plane fly. Not moved by the machine, but moved by the vicarious mark its history has left on my life. Of course I am too young to remember the aircraft fly in earnest, but this plane shaped my, and every other British child’s, neighborhood. As it started up I remembered George, my dad’s boss and the local dairy manager, whose face was badly scarred from a hit by a tracer round when he was a tail gunner. I remembered Doug, my school friend’s dad, who was shot down in one of these over France and would not tell anybody what happened after he was captured by the Nazis. I thought of Doris who lived at the end of the street and always found it hard to make ends meet, whose partner Dennis took off in one of these and never came back. I remembered my grandmother telling me how every evening she listened to the distinctive drone of the Rolls Royce engines lift them heavy into the sky as they set out for distant nighttime destinations, and would then listen for the inevitable sound of German Heinkel bomber engines as they reached her part of London and their destination.

So as this plane circled and flew low across the Hamilton runway on a sunny careless Saturday, I stood in silence remembering all those people I knew, and those I did not know, who in days of adversity had their lives shaped on both sides of the English Channel by this plane.
posted: Sunday, June 17, 2007 No comments: 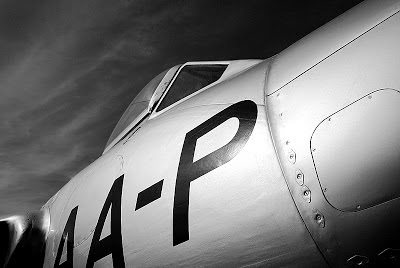 I went to the Hamilton Air Museum today - needless to say I took my camera!

This is a de Havilland Vampire, a jet fighter developed by the RAF in WWII, and seeing extensive service after the war in the late 1940s and early 1950s. Although it looks very futuristic in its metallic finish, parts of this aircraft were molded in plywood! Not bad for something that went 500 mph, oh and it did not have an ejector seat—so if your plywood caught fire—hard luck!

Joking aside—don’t make fun of this aircraft—she was in design and development by 1942 and that made this old girl way ahead of her time!
posted: Saturday, June 16, 2007 No comments: 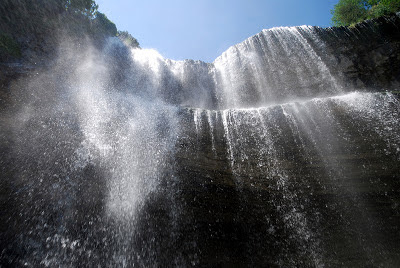 Inspired by my Nikon D80 not flinching recently after being sprayed with gallons of lake water kicked up by a rescue helicopter’s rotors, I decided to get in close to Webster’s Falls for a few shots—after all this misty spray was baby stuff after the helicopter.

Unfortunately, right after this shot several systems malfunctioned. I lost focus area selection control, image quality changed to RAW only, the function button became inoperative and auto-focus shut down. Luckily I could carry on shooting after switching to manual. As I continued to shoot I began to wonder whether the VISA Card purchase protection plan, which was still in effect for the new D80, covered customer stupidity.

But it is not customer stupid really, after all what use is a camera unless you can take it close into the action under any conditions? My hero, Robert Capa said, “If your pictures aren't good enough, you're not close enough.” I still remember the days when I had a Nikon (an FE) made of metal and it would run on manual without a battery and it would go anywhere!

Anyway—when the D80 dried off all systems returned to normal but because of the systems failure I never did get as close as I wanted. I post this shot because although not great (some of the highlights blown out), it took quite some getting!
posted: Friday, June 15, 2007 No comments: 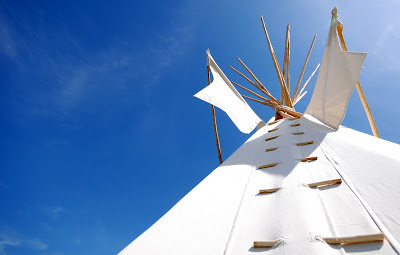 A teepee belonging to the First Nations University of Canada.
posted: Thursday, June 14, 2007 No comments: 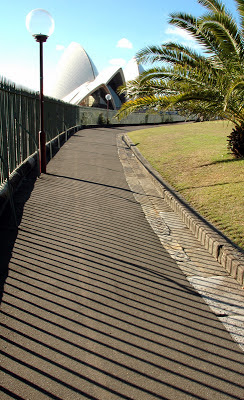 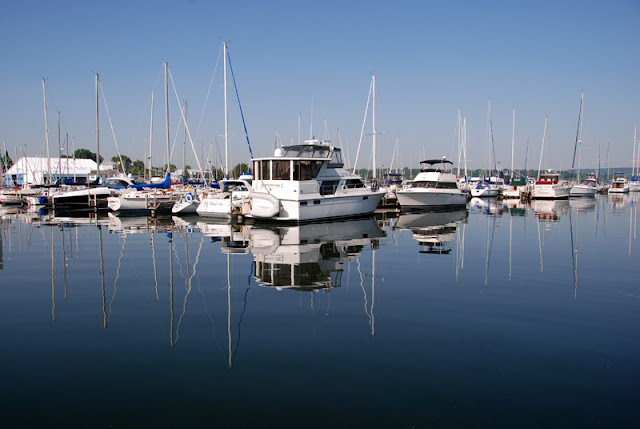 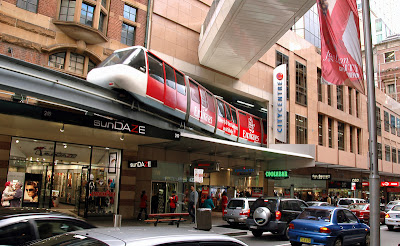 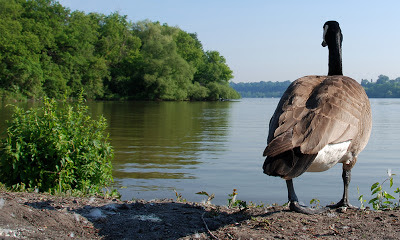 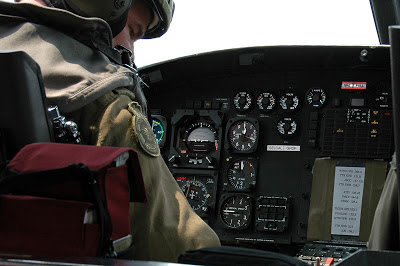 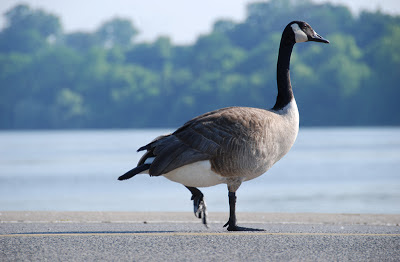 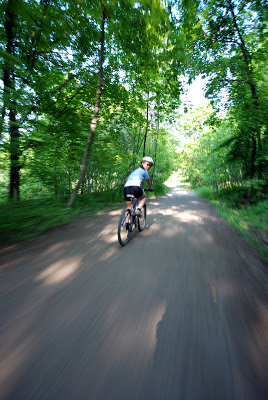 There is no photoshop here - all the blur is real - so was my huffing puffing trying to keep up!
posted: Wednesday, June 06, 2007 No comments: 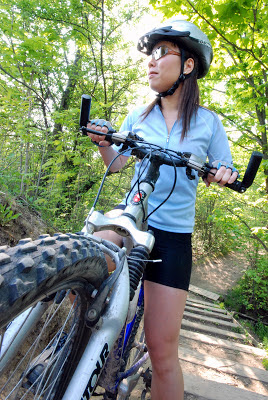 Friends often ask me to take photos for them — this is one of those photos — a shot from a series I did for friend from Church who is a serious mountain biker.
posted: Tuesday, June 05, 2007 No comments: 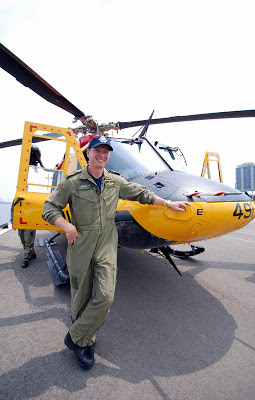 hamilton harbour from the sky 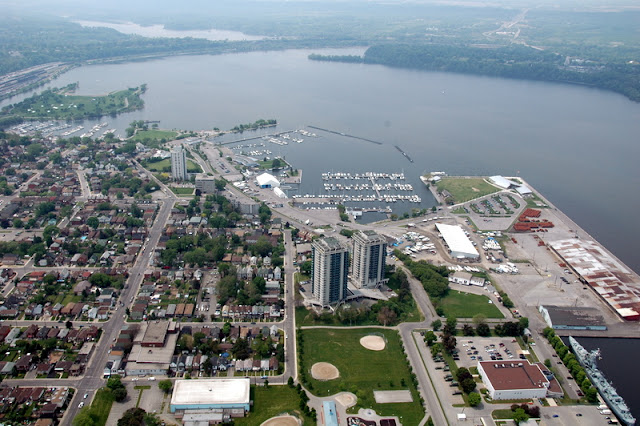 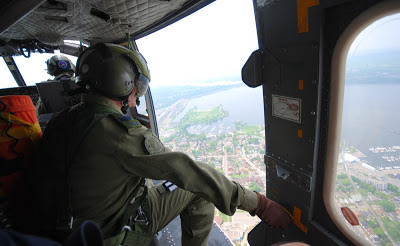 Flying over Hamilton - the guy at the door seemed worried that I may fall out even though strapped in - for goodness sake I used to jump out of these when I was a marine!
posted: Saturday, June 02, 2007 No comments: 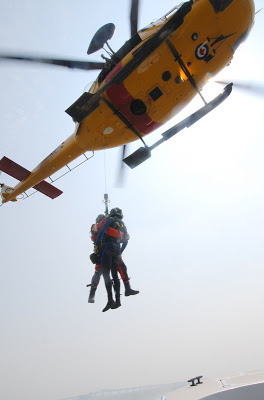