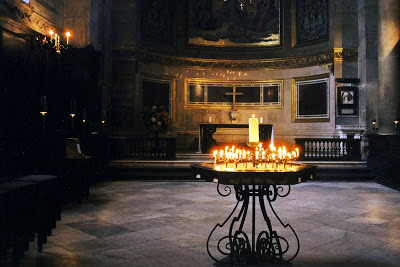 This is one of the chapels in St. Paul’s Cathedral in London, England. I spent literally days wandering around in St. Paul’s when I was a child; it is where I learnt to appreciate architecture, understand history, and discover my roots and heritage. In my teens and early 20s I also regularly visited to sit peacefully beneath the great dome and ponder God, life, and what I was doing on this earth. At one time when I worked in construction not far from here I actually visited every day!

Given the importance of this building to me I visited in the late 1990’s on my fist trip back to England after immigrating to Canada. I was about to walk freely inside but a new thing happened—I was stopped at the door and asked to pay! I can’t remember the price—but I remember that it was exorbitant—the current price of admission (in 2007) is C$25.00. I was also told that photography was strictly prohibited! As you can see from the photo—I did not take too much notice of this rule!

When I returned to Canada I e-mailed and complained to the managers of St. Paul’s about the admission fees and told them that if fees had been in place when I was a child I could never have afforded to go in and be enriched by the place. They replied and explained that from the very early days after the cathedral was built by Wren they had a tradition of charging for admission—it seemed that when I was a child this was one of the rare periods when admission was free—they had no intention of going back to that!. I checked this history books and sure enough it was true—shortly after the cathedral was built the rich people who spent time there found it unpleasant to be around the poor people who came in to wonder at the building—so they slapped on an admission fee.

I know that these places have to find funds from somewhere for their upkeep, but it this is truly the house of God (and I believe that it is), then charging people to go inside should not be one of those ways!
posted: Sunday, August 12, 2007