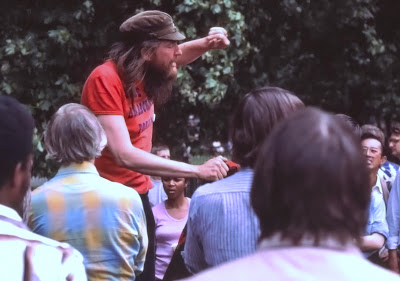 I took this shot ages ago at Speaker’s Corner in London England—a place where free speech is allowed. At the time I never saw the contradiction in having a place set aside for free speech in a nation that is supposed to be a democracy, which means that free speech should be allowed anywhere!

I also never saw the irony of people buying into the idea of this being the only place to exercise their right of free speech. An irony because this spot is always watched closely by the authorities so that when the revolutionaries, subversives, freedom fighters and even general rabble rousers want to say their thing, they travel all the way to London and say it on this very spot, under the watchful eye of government. Odd eh - the place is uplifted as a bastion of democracy serves to ensure that free speech is closely monitored!