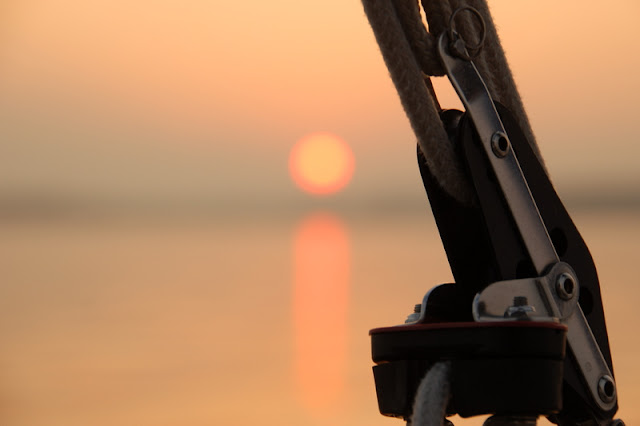 I have never “abandoned ship” before but yesterday I did. It began with lightning crackling down all around me into the water of Lake Ontario—disconcerting because my aluminum mast is not grounded—except through me as I grip the stainless steel wheel making a mad dash for cover! But coming prepared I had heavy-duty booster cables—I attach one end to the metal shrouds and dangle the other in the water—a trick that is supposed to ground the mast. Not really trusting this remedy and having anticipated storms, I made sure cover was close and so a short dash got me to the Burlington Lift Bridge. I circle as close to the bridge as I can get, which is right under the protection of high voltage hydro wires. As I circle lightening actually strikes one of the pylons next to the canal—no doubt in anger at not being able to reach me with its spidery fingers as I circle safely under the wires.

But then the wind came, and with it rain and hail so relentless that visibility was reduced to about 100 feet, I was in a squall. I still had fifteen minutes before the bridge would be raised to let me through the canal and I had heard earlier on the VHF that a freighter was due soon, but now I could not see if anything was coming. Buffeted by wind and waves I dared not leave the wheel to check the VHF, and if I did get to the VHF I would not be able to hear anything with the hail hitting the decks like bullets from a machine gun! What to do? I reason that the odds of a freighter coming through the canal in this squall is far less than the odds of me getting a lightning strike if I back away, so I stay where I am circling in the middle of the canal.

The squall is in full force as the bridge starts to rise, I go under the lift bridge and then under the much higher Skyway Bridge that also spans the canal. Visibility is still poor but I can see the shape of forked lightening shooting into the open lake ahead. I consider circling under the protection of the Skyway Bridge but I do not like being in a shipping channel longer than needed and I also don't like the way my outboard motor is starting to sound in the rain—all I needed is an engine failure in this! I decide to round the end of the canal and tie up at a small wharf which is nestled close enough to the Skyway Bridge to have some protection from lightning.

I turn to port and round the end of the canal that leads to the wharf, but realize that all my bumpers are on the starboard side and my port side is facing the wharf wall and the storm is pushing me from behind fast into the every narrow opening—no time to change the bumpers now—I will dock backwards so I can put my starboard side to the wall! Lucky the boat turns on a dime so I spin it around and throw it hard in reverse. Somehow, despite the wind and waves, the boat navigates perfectly backwards alongside the wall, some forward thrust into the wind and my starboard side bumpers rest gently against the dock. I cut the engine, jump ashore, tie the boat up firmly and as lightning continues to crackle around my ears I run to the shelter and safety of the small wooden store beneath the bridge. As I enter the small store it is full of fishermen who are taking shelter all of whom had been watching through the window.

“I have never abandoned ship before,” I said pointing out the window at my sailboat, “but there has to be a first for everything!

The fishermen laugh and one replies, “I like how you brought it in backwards to have the front facing the storm when she is tied up.” I did not have the heart to tell him that this was not the result of seamanship but of having my bumpers on the wrong side!

Another fisherman, hearing my accent, says, “It is as bad as the English Channel out there eh.”

Needless to say I was too busy to take pictures of that adventure, but later the weather cleared up and the day gave one of the nicest sunsets ever. So I leave you with a sunset that made the end to a perfect day of sailing.
posted: Sunday, October 07, 2007