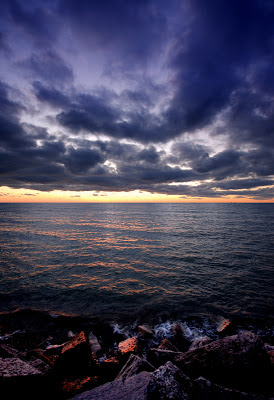 I posted a similar sunset shot a few weeks ago—possibly the last sunset I will take with my Nikon D80. One of my sons was going to buy a Nikon D80 so I sold him mine along with my Nikon 18-200VR lens and he got a great deal from me on them. The reason—so that I can go get a Nikon D300—Nikon’s newest model!

The problem is that although the D300 came out this week, I have not picked my order up yet because I am looking at the reviews. People are making a fuss about the high ISO capabilities of the D300 but I like to shoot at low ISO and at all levels I am noticing that some of the D300 results on the web look a little soft and lack the superfine detail that I like in pictures—a bit like they have used too much noise reduction. Maybe I should I go with the new Canon EOS 40D or perhaps the older Canon EOS 5D with its full size sensor and newer low price? If I did go to Canon, now would be the time because with the 18-200 Nikon lens sold, I am not holding much Nikon glass (lenses) so I am in a good position to buy Canon glass (a set of lenses usually cost more than the camera and this is why photographers do not usually change from one make of camera to another because they have so much invested in lenses).

Hmm hard decisions – but at least while I am making up my mind I can borrow my D80 back. So do you have any ideas on whether I should go with Canon or stick with Nikon?
posted: Wednesday, November 28, 2007 No comments: 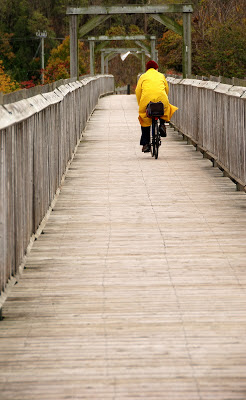 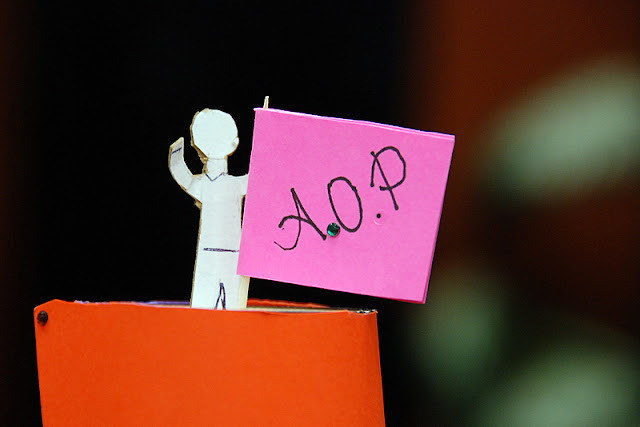 Not the best picture in the world—but a very special moment—a shot of an “AOP” poster taken tonight.

Tonight was the last class in an AOP (anti-oppressive practice) course I co-teach and students made poster presentations. The creativity of the posters (most were actually interactive models) was amazing and the depth of analysis they represented was awesome. Even more amazing is the privilege to teaching, and learning from, a group of brilliant students who are intent on making a difference in the world.

This picture was taken and posted with the permission of students in the group who made it.
posted: Tuesday, November 27, 2007 No comments: 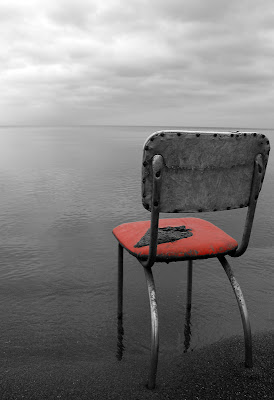 I posted a similar shot to this some time ago - but I liked it so much I decided to post another
posted: Sunday, November 25, 2007 No comments: 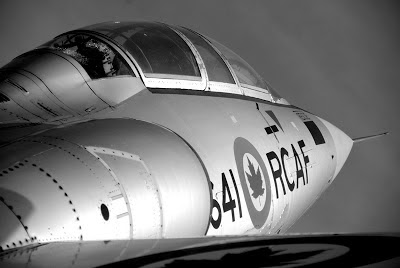 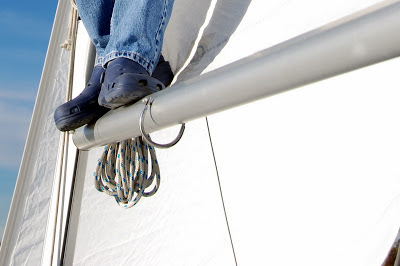 This was taken just two-weeks ago—me walking on the boom on a sunny day sailing. Quite a different story tonight with icy rain is sweeping across Sothern Ontario and tomorrows temperatures predicted at -5c. With this unexpected cold snap, given the worries I raised in yesterdays post about water ballast freezing, I decided to take the boat out of the water this evening. It was quite the adventure getting the boat to the ramp and onto the trailer in the dark with tonight’s wind and rain. But it is done—and that is it—the season is over.
posted: Thursday, November 22, 2007 No comments: 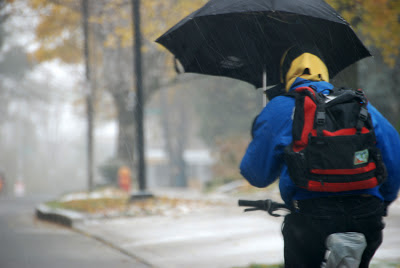 Today it snowed so much that even the cyclists needed umbrellas.
posted: Thursday, November 22, 2007 No comments: 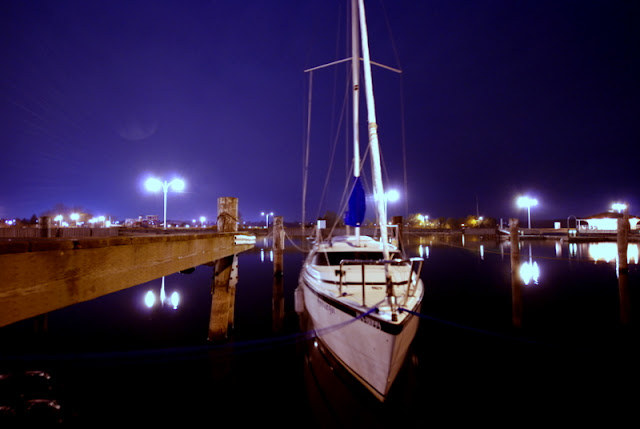 I planned to leave the boat in until the new-year because there is nothing like sailing in the snow and trying to dodge ice in the lake. But then I realized something important that I almost forgot—this boat uses water ballast, which means that at the bottom of the hull there is a tank with about 1500lbs of lake water inside to give the boat stability when under sail. Unlike the lake, however, which retains some warmth and does not fully freeze until well into well into the winter, the water in this tank will start to freeze as soon as the air temperature falls below zero. That is, of course, a huge problem because as the ice in the tank starts to freeze it will expand and crack not only the tank but the hull - and then the the boat will sink! 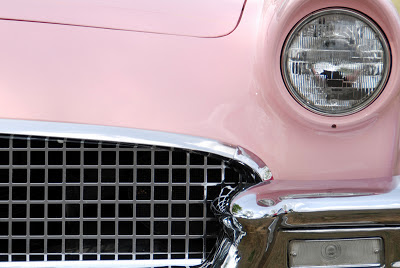 I took this in the summer sometime - I can't remember what type of car it was - except that it was pink.
posted: Monday, November 19, 2007 No comments: 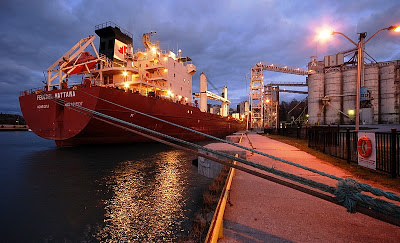 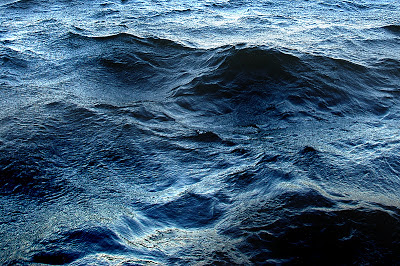 A picture taken on a late afternoon sail today - it is getting cold out there!
posted: Sunday, November 18, 2007 No comments: 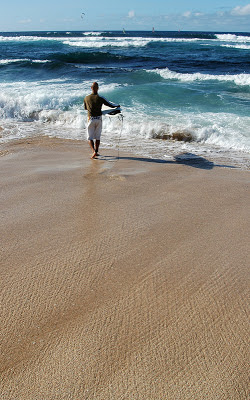 A shot taken earlier in the year on a Maui beach.
posted: Saturday, November 17, 2007 No comments: 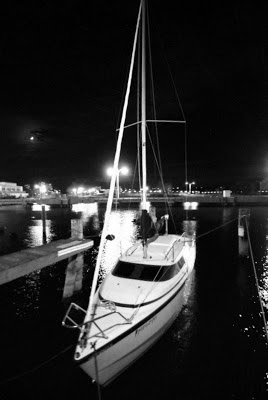 On the way home I stopped by to check the boat and I could see something was wrong. The anchor was in the water and a spare mooring line I had stowed was attached to a cleat on the front deck. I boarded and noticed that the main hatch padlock was missing and the head (washroom) door was ajar. Someone had broken in!

Nothing was missing, except a pair of new binoculars. Odd because stowed with the binoculars was an A1 Fallkniven Survival knife with a laminated VG-10 high carbon steel blade, a nice prize valued at about $250.00, yet this was not taken (I have now removed it from the boat). Clearly the bandits were not hunting or military types or they would have immediately seen the value in this knife. They were also not your average desperate for cash types because there were a number of odds and ends that a person looking for money could have stolen and sold, but all these things remained undisturbed.

So why only the binoculars? I suppose the bandits may have been sailor types who had seen and come looking for my Garmin Nautical GPS—a nice prize valued at around $2000.00. But not finding that on the boat (I always take it home with me) they went for the consolation prize of binoculars. This theory might make sense if it were not for the anchor in the water and line on the bow. I think once on board the bandits could not get back ashore because the boat tends to drift from the dock—any sailor types would have just adjusted the mooring lines—but these chaps could not figure that out and had to resort to desperate measures with the anchor line and an additional rope to pull the boat in. Clearly they were not sailors—they must be landlubbers! But maybe they were landlubbers for hire who went looking for the GPS for someone else.

The other interesting factor was that they cut the padlock off rather than smashing the hatch open. This was in fact very nice of them because it would have been easier to smash the hatch and damage the boat than cut the lock. But to cut the lock they must have brought huge bolt cutters with them—another clue that this was not a spontaneous random act by delinquent youths. It was also nice of the bandits not to mess up the inside of the boat or vandalize anything—in fact everything looked tidy and undisturbed.

After discovering the boat broken into I closed the hatch and worked quietly inside in the dark (with a small light on) grading some papers for a few hours hoping that the bandits would come back so that I could surprise them and ask for the binoculars back and of course to also thank them for not damaging anything—but they never came. I am, however, still looking out for these bandits and I can give a description. They are kindhearted (because they did no damage to the boat) landlubbers (because they did not know how to adjust dock lines) with short legs (because they could not get back ashore once aboard) wandering around Hamilton carrying huge bolt cutters and wearing a pair of made in China binoculars that they can’t sell because their buyer wanted a GPS.

As for police reports—I am not going to file one for a pair of binoculars and especially because there was no real harm done. I count it as a good reminder not to leave anything of value on a boat and also a nice reminder that even some thieves have a heart and do not go out of their way to unnecessarily damage property.

Oh and the picture - taken tonight as I was leaving the crime scene!
posted: Thursday, November 15, 2007 No comments: 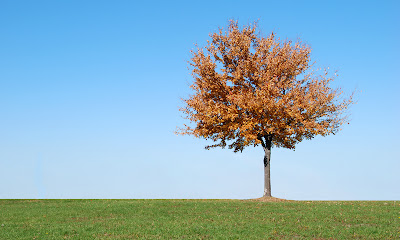 I have never thought of it this way before but trees really are a work of art. Why go to a gallery when you can sit in a field and look at a tree? Don’t get me wrong I don’t hug trees—but I do take their photos!
posted: Wednesday, November 14, 2007 No comments: 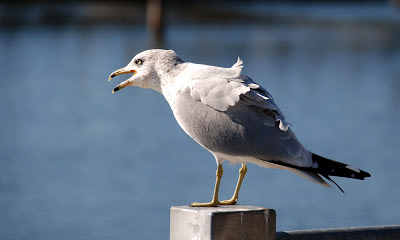 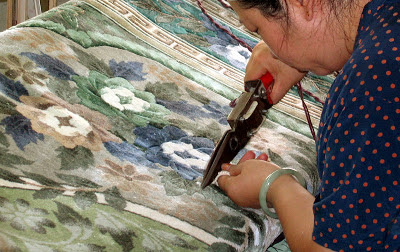 I took this shot some time ago in China of a worker completing the artwork on a woven rug.
posted: Saturday, November 10, 2007 No comments: 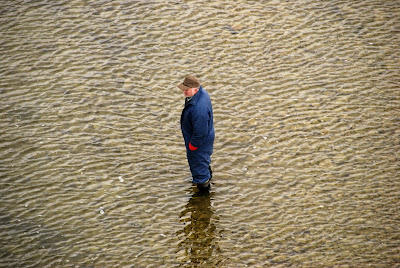 I stopped to look over a bridge on a rural Ontario road last week and I saw this guy standing in the river trying to find fish.
posted: Thursday, November 08, 2007 No comments:

the call of the sea 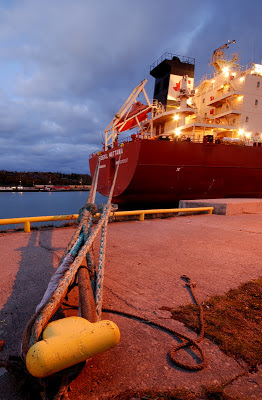 I watched this ship set sail recently at sunset. As I did I remembered my dad because so many times he set sail in exactly the same way. If he was still with us he would have watched it leave just like me – only as she left he would have heard the call of the sea much more than me – a call so hard to resist. This ship sails under a Liberian flag – not only by the flag but also by the design one can tell she is a "salty" which means she is bound for shores far beyond the great lakes.
posted: Wednesday, November 07, 2007 No comments: 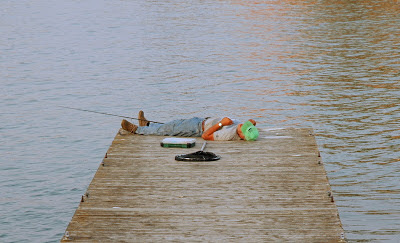 I took this picture some time ago - at first I thought he was dead - but he was only sleeping.
posted: Monday, November 05, 2007 No comments:

now that is a mainsail 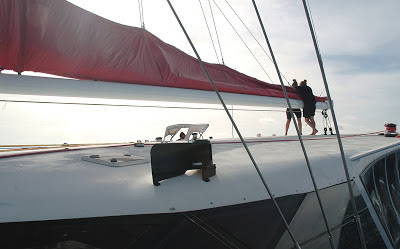 A shot I took sailing of the coast of Australia
posted: Sunday, November 04, 2007 No comments: 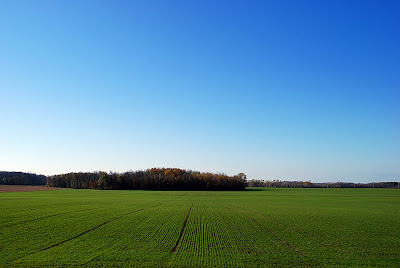 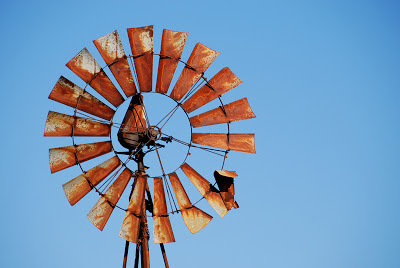