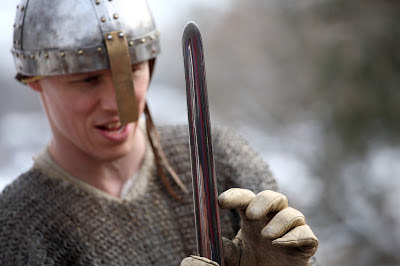 One of the nice things about the full frame sensor in the Canon 5D is the shallower depth of field it allows. I deliberately focused on the sword to make it the subject by blurring the background.

Now about these Vikings… It was a strange feeling meeting them because my family has Viking roots. We came from the north in longboats but people did not seem to like us too much and kept asking us to leave. By the year 911 my part of the family grew tired of sailing around trying to make friends so we settled on some nice French beach property which we named 'Normandy' after ourselves (Northmen). But by 1066 we got restless again and joined Duke William when he decided to conquer England. In England we stayed and became what Napoleon was reported to refer to as 'storekeepers' of all things, well not me of course because I came to Canada. So you can imagine my surprise when I bumped into ancestors on a Sunday afternoon stroll in the woods!
posted: Tuesday, February 05, 2008