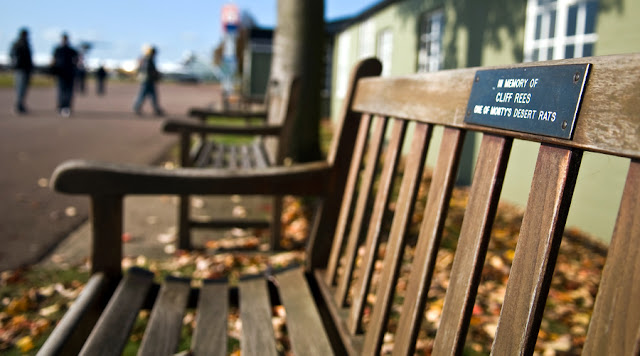 A photo from the archives for Remembrance Day (originally taken at Duxford Air Museum in 2008). The sign on the bench says “In Remembrance of Cliff Rees a Desert Rat.” I don’t know Cliff Rees, but the fact that he was a Desert Rat counts for something in my books; the Desert Rats (the British Army 7th Armored Division) scurried around North Africa in WWII trying to outwit the Desert Fox (Field Marshal Erwin Rommel), and after fighting in every major battle of the North African Campaign, they went on to fight in Sicily, Italy and Normandy. So a bench at the Military Museum is a fitting place to remember Cliff Rees - chances are people passing will stop for a few moments and although never knowing Cliff will know where he has been and the things he has done — Cliff Rees you (and your comrades) are well remembered.
posted: Monday, November 11, 2013