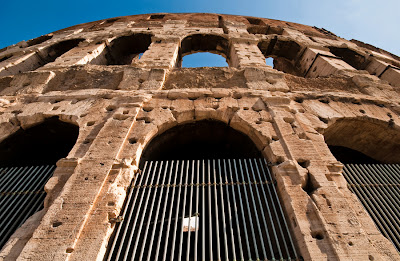 I visited the Colosseum on my first day in Rome and on my last day I had an afternoon spare before my flight so I returned and sat inside for a few hours until closing time. I have read quite a bit about this place and know its history reasonably well, but it was hard to imagine it all once I was there. The bustle of tourists, cameras and tour guides are now the reality of this place and for me the history that once played itself out here seemed just a little too distant to touch. In my mind I knew the stories and even the names of specific characters who earned their living within these walls—I also knew about the mostly nameless people whose lives ended here—including the thousands of Jewish slaves who built the place—but their times and those days were now hidden behind the noise of traffic and an army of Gelati Ice Cream vendors (really good ice cream by the way). Never-the-less it was still a moving experience, to sit for a while to see and feel the place where that unimaginable history took place.
posted: Sunday, October 12, 2008