guardians of the sky 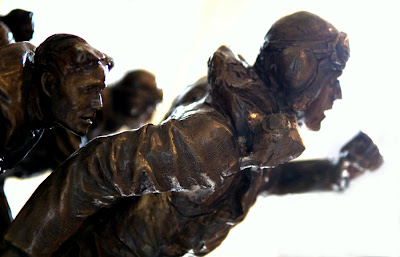 I took this picture at Duxford Air Museum; it is a sculpture of a WWII fighter pilot "scramble."

After the British army was defeated at Dunkirk in France, the Nazis war machine was ready to expand across the English Channel into Britain and the defense of Britain rested with the Air Force. This sculpture commemorates pilots “scrambling” (running) to their aircraft ready to defend Britain’s skies - even now this is a vivid image of the resistance of the men and women in that day. The video below shows a Spitfire which is one the aircraft flown at the time.