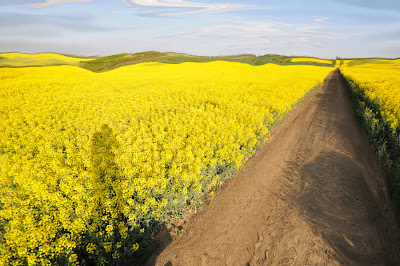 Although I already knew a fair but about Van Gogh, I developed a new appreciation for his art. All along I liked the stand he took on issues that got him thrown out of the established church, but until Bryan helped me look deeper into the art I did not see that thread ongoing in his later works. Now I do, well at least I think I do, but I can’t be sure because as Bryan points out it is all open to a wide range of interpretation.

Anyway it had me wishing I could take photos like the pictures Van Gogh painted – and then I had this idea! So here is a shot I took of field in England standing on the roof of my mom’s car (sorry mom—but I did take my shoes off) and the shot has been modified in the distance with Photoshop.