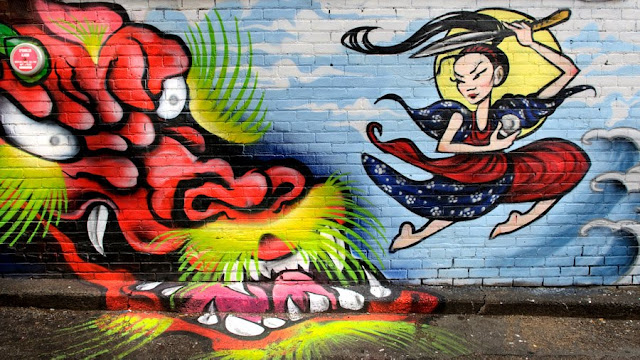 Well the photo is not really "stolen," but I have to admit this shot was not my idea. A few weeks ago I saw a shot of this exact scene on the site of photographer rrz and I really liked it. Well today, driving to a PhD defence at the University of Toronto, I was heading up Spadina Avenue and off a side street I caught a glimpse of an alley with this scene. So of course I stopped and took a photo.

When I first saw this scene through western eyes I thought that here is a poor girl being chased by a nasty dragon, but likely she needs no St. George to rescue her, because she seems to be some type of Kung Foo expert. But then I remembered that Chinese dragons are not bad like their western counterparts, in fact they are quite nice and noble. I also remembered that each dragon has a pearl which is a great treasure because it is the source of their strength and wisdom. So another interpretation of this scene is that this girl has stolen the dragon’s pearl and he (dragons are usually boys) of course is not too pleased and is simply trying to get it back without being poked in the eye by that sharp sword she has. I think there is even an ancient Chinese legend of a queen mother from long ago sending a guard to steal the Jade Dragon’s pearl. Maybe this is that guard and the scene depicts that story.

The other more modern meaning and the official reason for this mural is that these alleyways have had a graffiti problems and the Toronto Mayor’s solution was to sponsor this art. That will work – not only are dragons good at chasing Kung Foo girls — they are good at cleaning alleyways up too.

Anyway enjoy - and thanks to rrz for the original idea.
posted: Wednesday, May 12, 2010