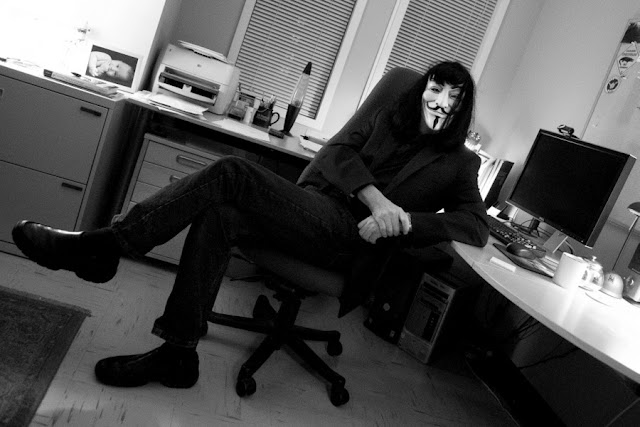 A self-portrait shot on auto before giving a Halloween lecture, which went something like:

"Good evening, McMaster. Allow me first to apologize for this interruption. I do, like many of you, appreciate the comforts of the everyday routine, the security of the familiar, the tranquility of repetition. I enjoy them as much as any bloke. But in the spirit of AOP whereby we disrupt the discourses that keep us static in the same old bloody struggle - I thought we could mark this Halloween by taking some time to sit down and have a little chat.

There are, of course, those who do not want us to speak. I suspect even now orders are being shouted into telephones in Ottawa, and regulators with approved curricula and lists of evidence based practice standards will be on their way. Why? Because, while statistics and numbers may be used in lieu of conversation, words will always retain their power. Words offer the means to meaning and for those who will listen, the enunciation of truth. And the truth is, there is something terribly wrong with this country, isn't there?

Cruelty and injustice...intolerance and oppression. And where once you had the freedom to object, to think and speak as you saw fit, you now have censors, regulators and systems of surveillance, coercing your conformity and soliciting your submission. How did this happen? Who's to blame? Well certainly there are those who are more responsible than others, and they will be held accountable. But again, truth be told... if you're looking for the guilty, you need only look into a mirror.

I know why you did it. I know you were afraid. Who wouldn't be? War. Terror. Disease. The need for a good social work or labour dispute resolutions job. There were a myriad of pressures which conspired to corrupt your reason and rob you of your common sense. Fear got the best of you and in your panic, you turned to the security of a social science job in a neo-liberal state where there will always be problems or labour disputes someone will pay you good money to repress.

But if you see what I see, if you feel as I feel, and if you would seek as I seek... then I ask you to stand beside me. And say that we have had enough of the same old same old, and as a part of a new generation, let’s give the world a message about anti-oppression that will never, ever, be forgot!"

(PS you have to see the movie the costume comes from to get the significance of the text)
posted: Monday, October 31, 2011